Switching From WordPress to Octopress

Today marks yet another milestone for Midnight Cheese by successfully making the migration from WordPress to Octopress. With web trends moving toward fast, light, and responsive, my WordPress setup was becoming slow, bloated, and stagnant. WordPress functions well, but for a single user it was just too large of a feature set. The slow page-load times really made this obvious.

Octopress is the complete opposite of WordPress. Octopress is all static. No scripting. No DB.

Some History
The current design is the default Octopress theme. That means a redesign is coming soon. I started looking back and realized 2007 was the last time I applied a design update, which is a bit embarrassing.

Octopress is the fourth blogging CMS that the site has operated under. Blogger started everything off very early on, followed by Greymatter (also based on static files) in 2001, WordPress in 2004, and now Octopress. 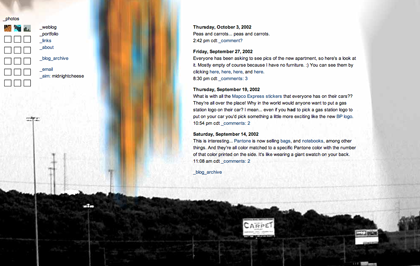 Issues with Disqus
The WordPress import instructions on the Octopress site worked well. The most time consuming part for me was getting Disqus properly set up. It turns out you have to enable comments on each post.

This meant a lot of text manipulation across some 470 posts. I used a little perl action to run through the _posts folder and change what was needed in each file. Basically a find and replace action.

In addition, to get the comment count to appear on the main index view, I had to implement this Disqus fix from Benjie Gillam.

Image Files and Redirects
Storing my repo on Github, I decided I didn't want to have all my images and various media files sitting on Github's servers, or across multiple repos on my various computers. On most posts I often have quite a few images. To solve this I created an assets subdomain and moved everything over, keeping all those large files out of the code base.

Many of my images rank well on Google image search which drives a good bit of traffic to the site. That meant 301 redirects for all my images. And again I used that perl script to run through all the posts to modify image URLs.

To the Future
I love how light and responsive the site has become with the static setup. Next on the list is a fresh design and custom asides. Flickr will probably be top on the aside list.